In your time aboard the Alithea, you’ve navigated your way through the restaurant, the spa, the casino, and gardens. Now it’s time to explore somewhere all Residents should fear: the Personoids’ home turf!

A First Class Trouble update is coming next week, and we’ve got first details straight from Invisible Walls!

An interview with Andreas Bech from Invisible Walls 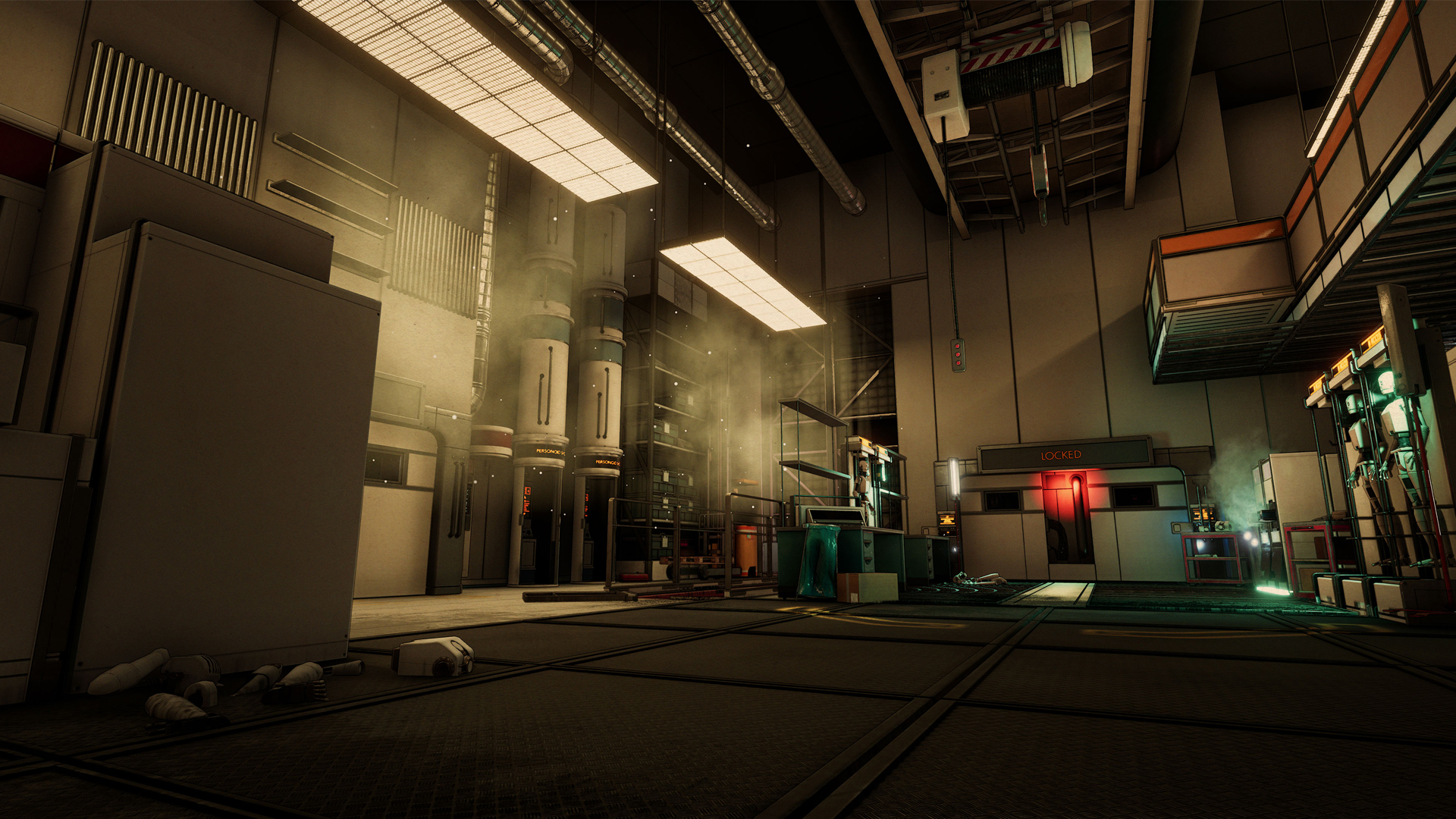 Let’s start by having you tell the FCT community a bit about yourself!

Hi there! My name is Andreas. I’ve been with Invisible Walls almost since the beginning. I left my work in the medical industry to pursue my passion for visual development and started as an intern Concept Artist at the company.

Since then, I’ve transferred into the role of Art Director, where my responsibilities expanded to everything related to the visual side of FCT (or Cainwood, as it was called back then).

What is a typical day like for you at Invisible Walls?

I very rarely have two days that are alike. However, most days involve a lot of talking, discussing feedback and planning with all our talented artists to make sure we are on track, and ensuring that everyone knows what to prioritize.

In between all the meetings, my time is often spent either designing assets and “kits” for in game use or assisting on marketing materials, UI work, and various design challenges. I love every single second of it.

How does your work begin on a new project? For example, once the team decides on a new area, like the Botanical Gardens, what comes next for you?

When we start work on a new area, the first step is always to collect as much inspiration as possible. We typically fill out a large reference sheet with a wide range of visual material that we find interesting to the area we are developing. It can be anything from images from the 50s to contemporary patterns, color combinations and architectural solutions that we feel could work on board the Alithea. 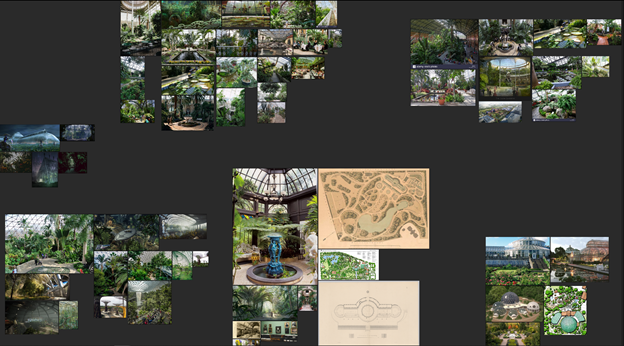 From there, Sebastian and I try to agree on an overall direction and rough level layout so that he can begin level design, and I can begin designing the visual style of all the items that will go into the area.

Back when I started, we often rendered 2D pieces of the new areas. However, I found this to be fairly time consuming considering our limited resources. For this reason, we have transferred to a more 3D integrated workflow, where me and the other artists typically mock up a lot of the design in rough 3D for the level designers to use right away. These are then replaced as the 3D artists update them with final 3D models. This way, the level designers can work almost in parallel with the art team.

Since there aren’t a lot of gardens in space (that we know of,) what’s your research process like, and where do you look for inspiration?

As with most things related to FCT, we try to keep everything a bit grounded and widely influenced by designs from around the mid century era. We also looked into how other games have done “biodomes” and similar areas. Prey is a good example of this (I absolutely love the visual design of that game, and we often visit it during development).

We quickly realized that some obvious and fitting sources of inspiration were located in our own backyard in the form of The Botanical Garden in Copenhagen and the Ny Carlsberg Glyptotek, an art and archeological museum. Mix it up with a skybox of space, and the Alithea Gardens almost created itself.

Botanical gardens are one thing, but the next update for First Class Trouble will feature a new location: a Personoid Maintenance area. Residents will finally get a peek behind the curtain, so to speak. As a conceptual artist, did this get your creative juices flowing right away or did it present early challenges?

Ever since I was first introduced to Dieter Rams designs, I have been a huge fan of his simplistic and functional design philosophy. As such, a lot of the design for this area, including CAIN and the Personoids, has been created with inspiration in Rams’ consumer electronics and general electronic equipment from back then.

We also looked a lot into how the world’s first electronic computer worked and based the size and design of CAIN upon this. As for the rest of the area, we have simply tried to keep everything within roughly the same form language.

The design process of this area ended up being a bit peculiar since we actually started out by defining the looks of CAIN and the “Servers”/Vacuum Tube walls, and from there tried to create an area that supported that. 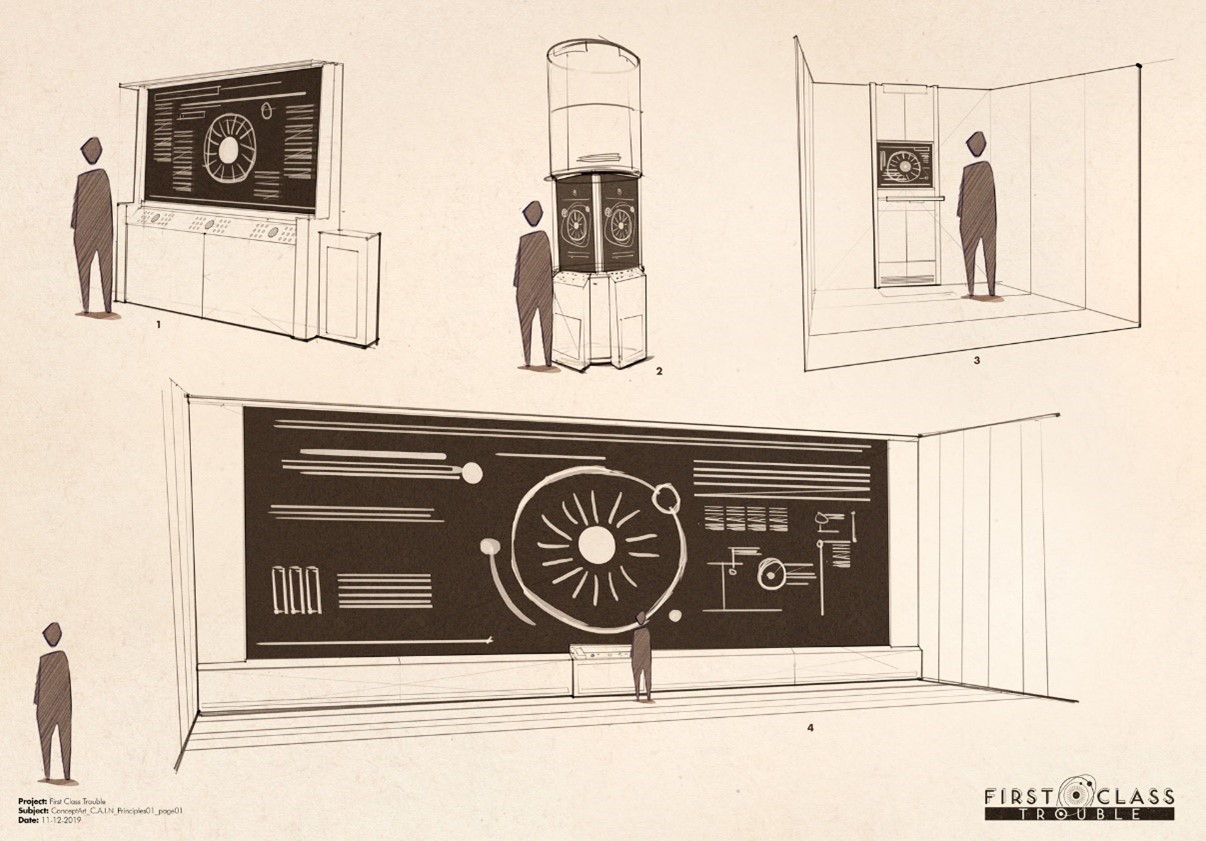 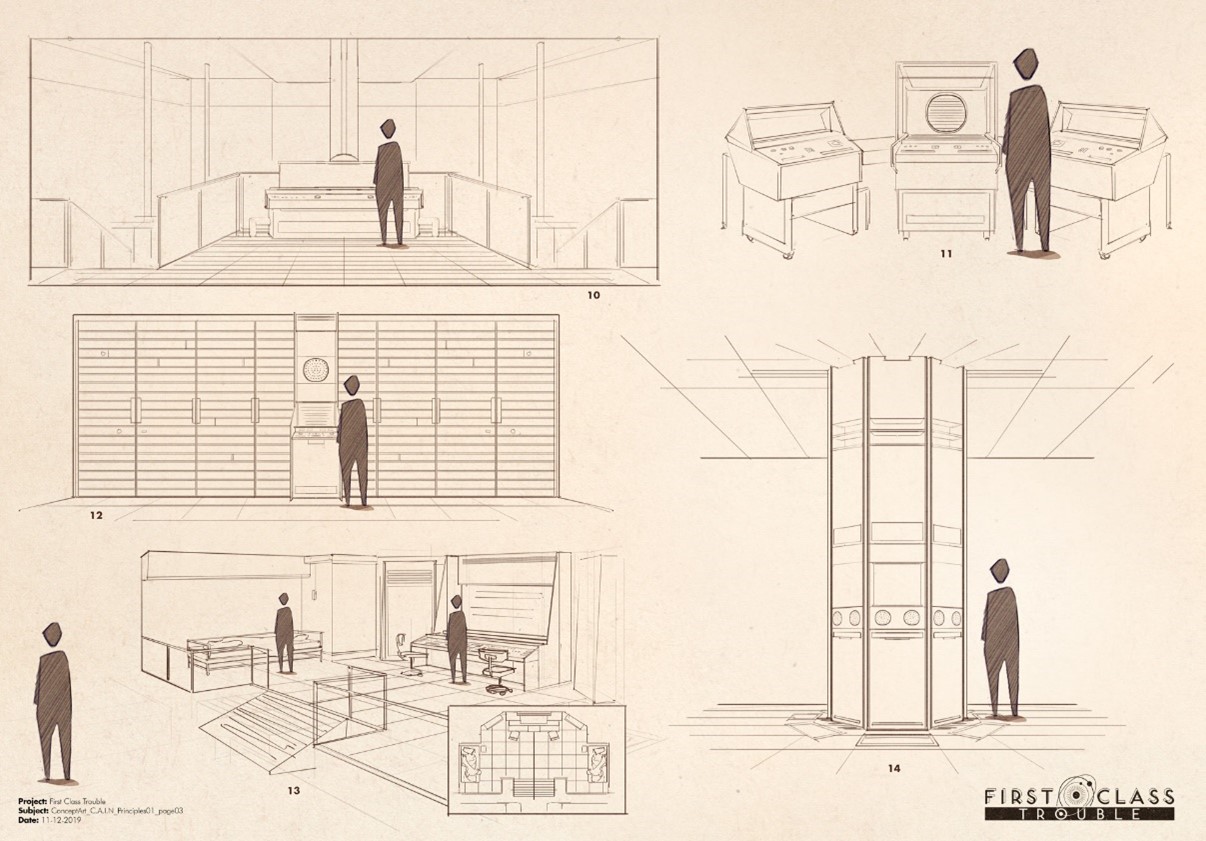 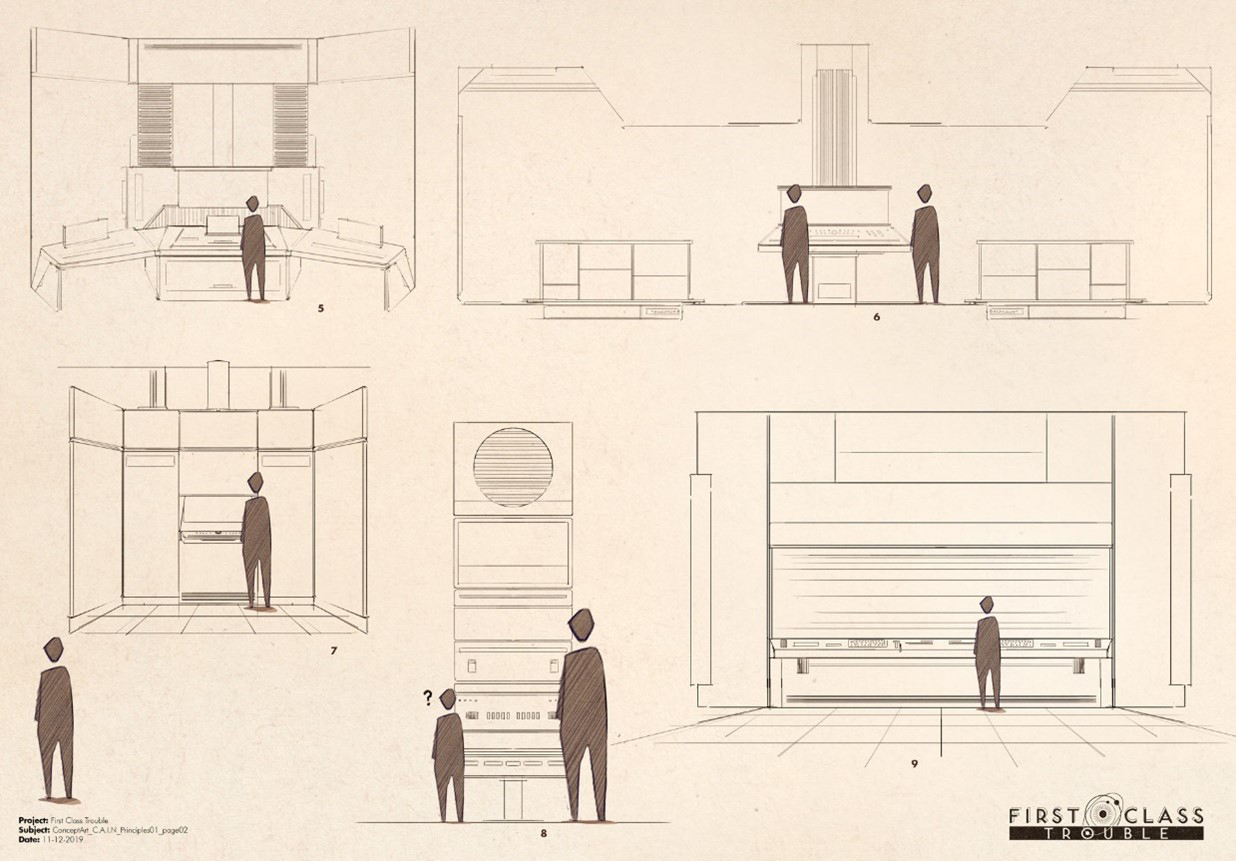 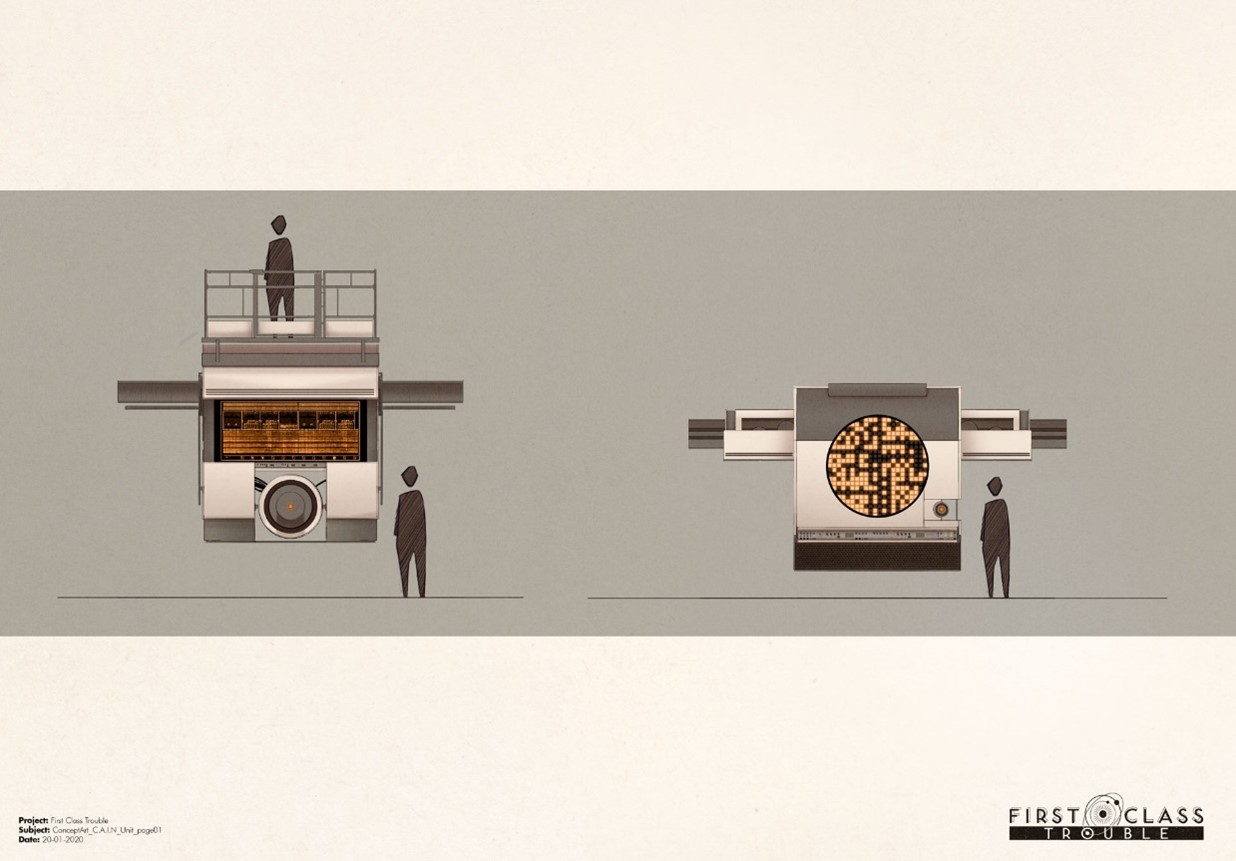 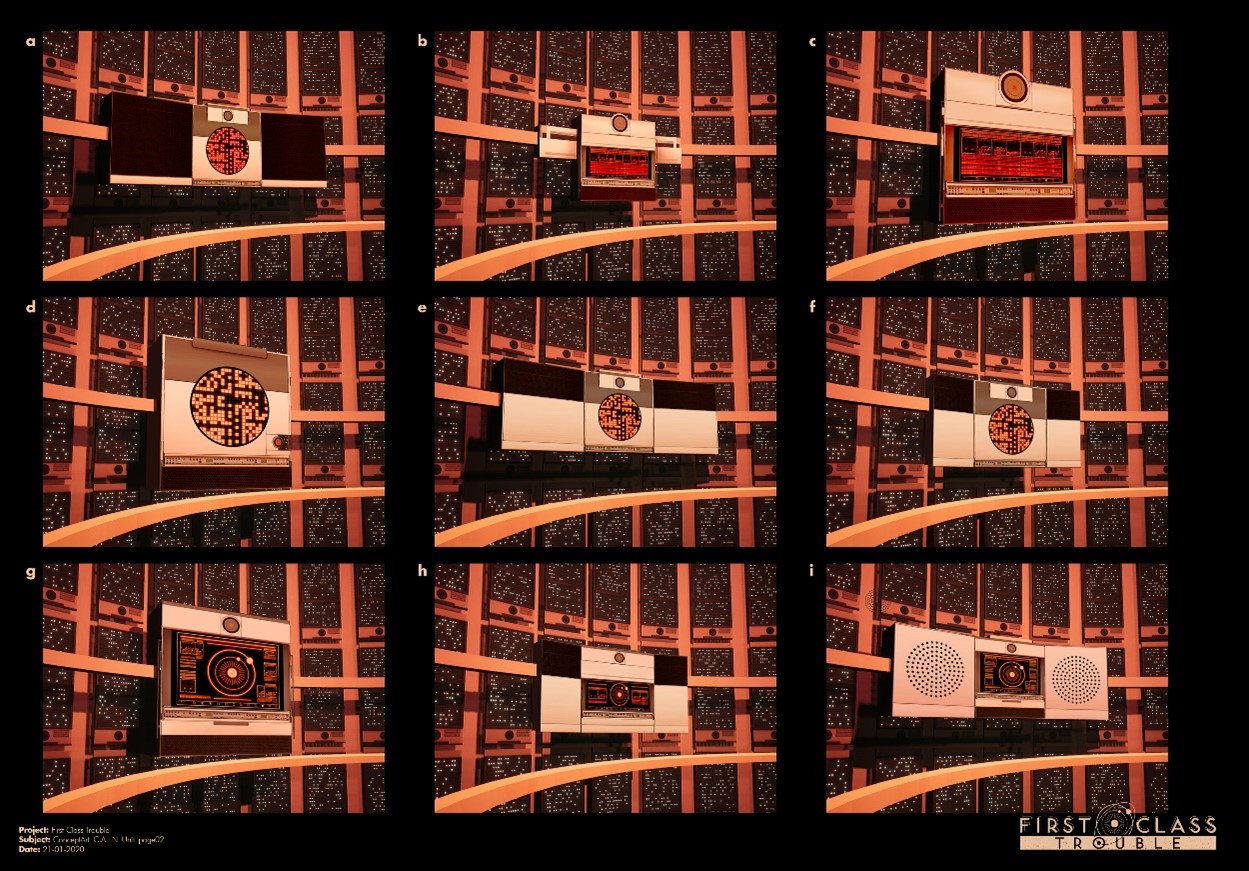 Once we were happy with CAIN, we turned our attention toward the other assets that would fill the area. A selection of these are shown below. 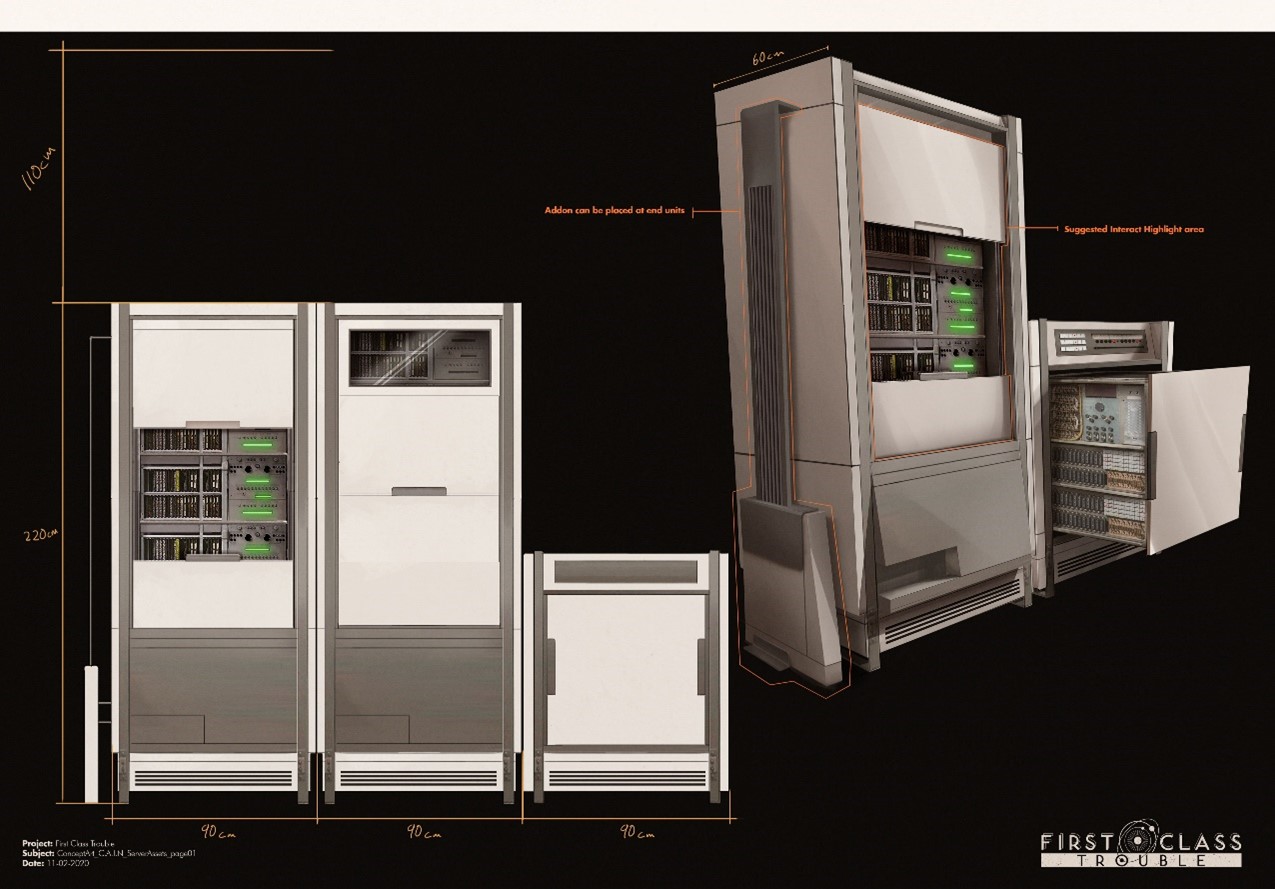 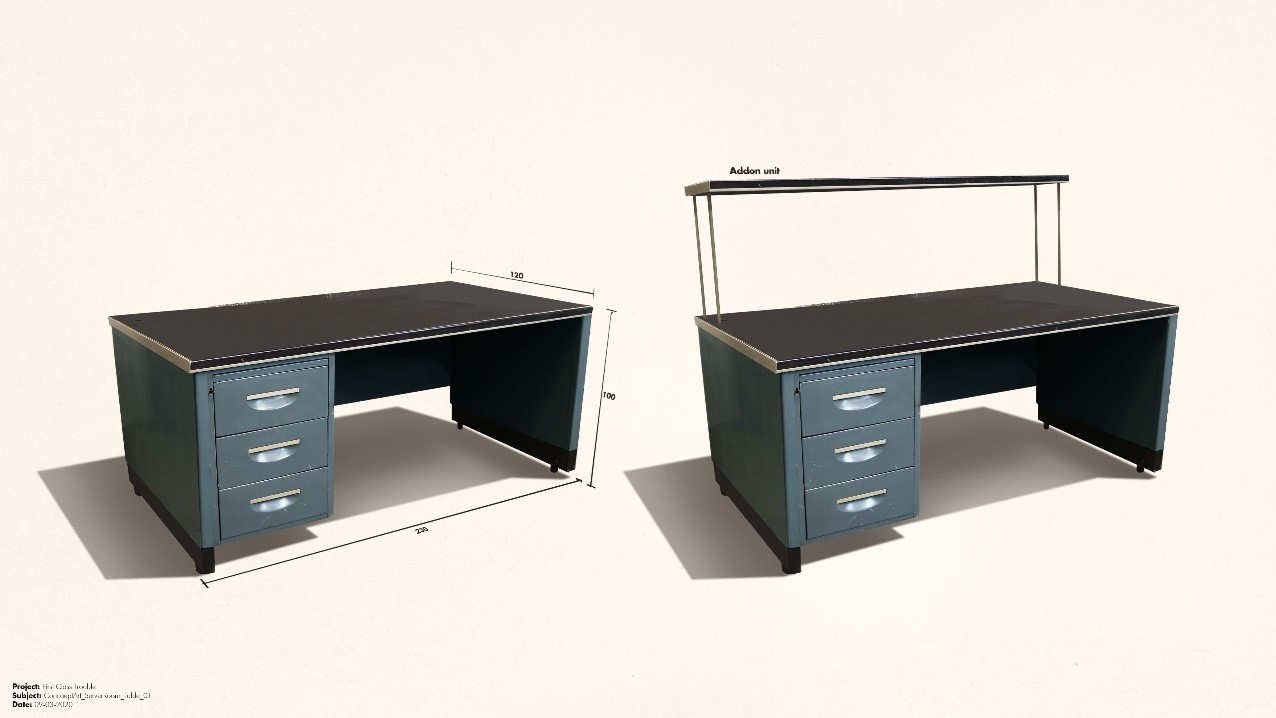 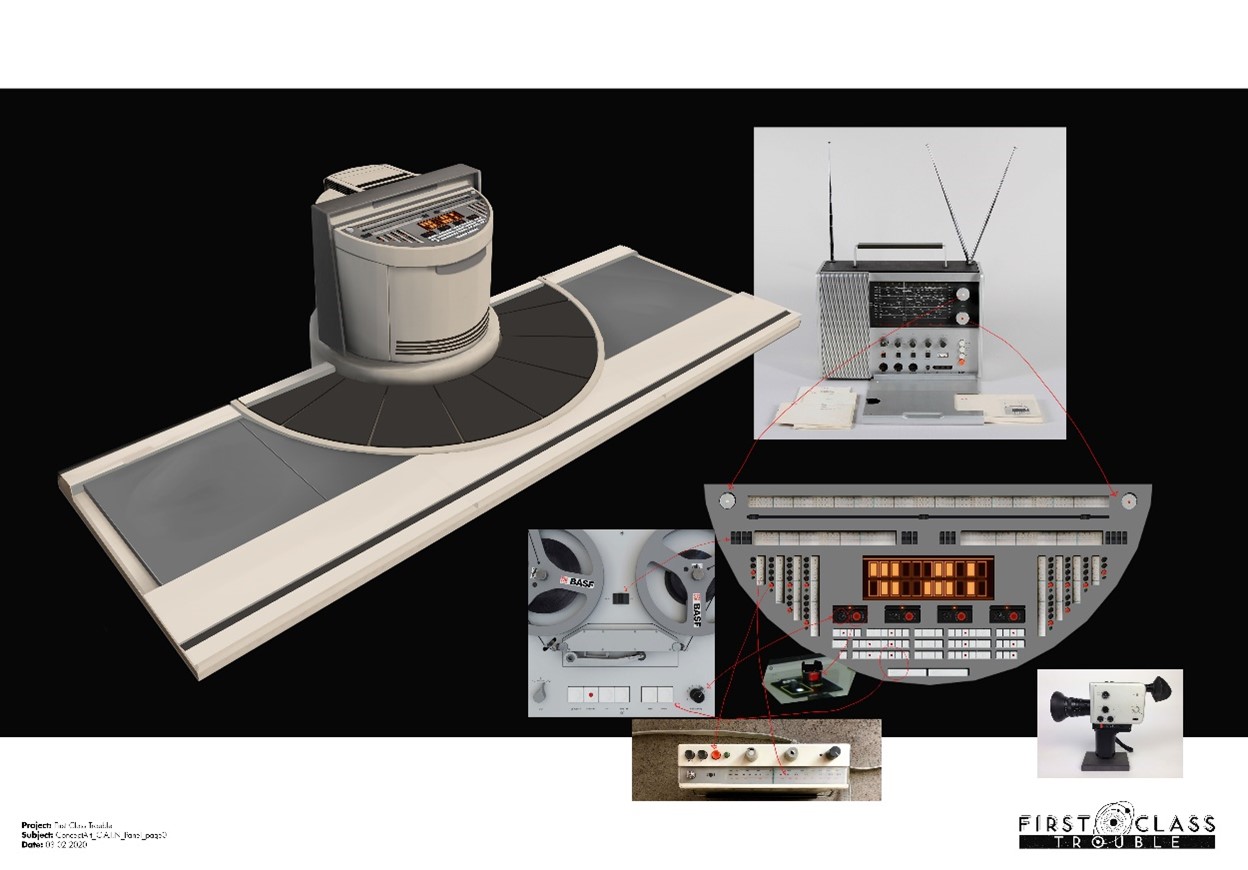 And finally, we designed what we internally call “kit:” pieces to create walls and ceilings which supports and enables the level design that our level designers have created. We typically have between 2-5 “kits” created for each area, which consists of pre-defined walls and corner pieces that we build everything with. 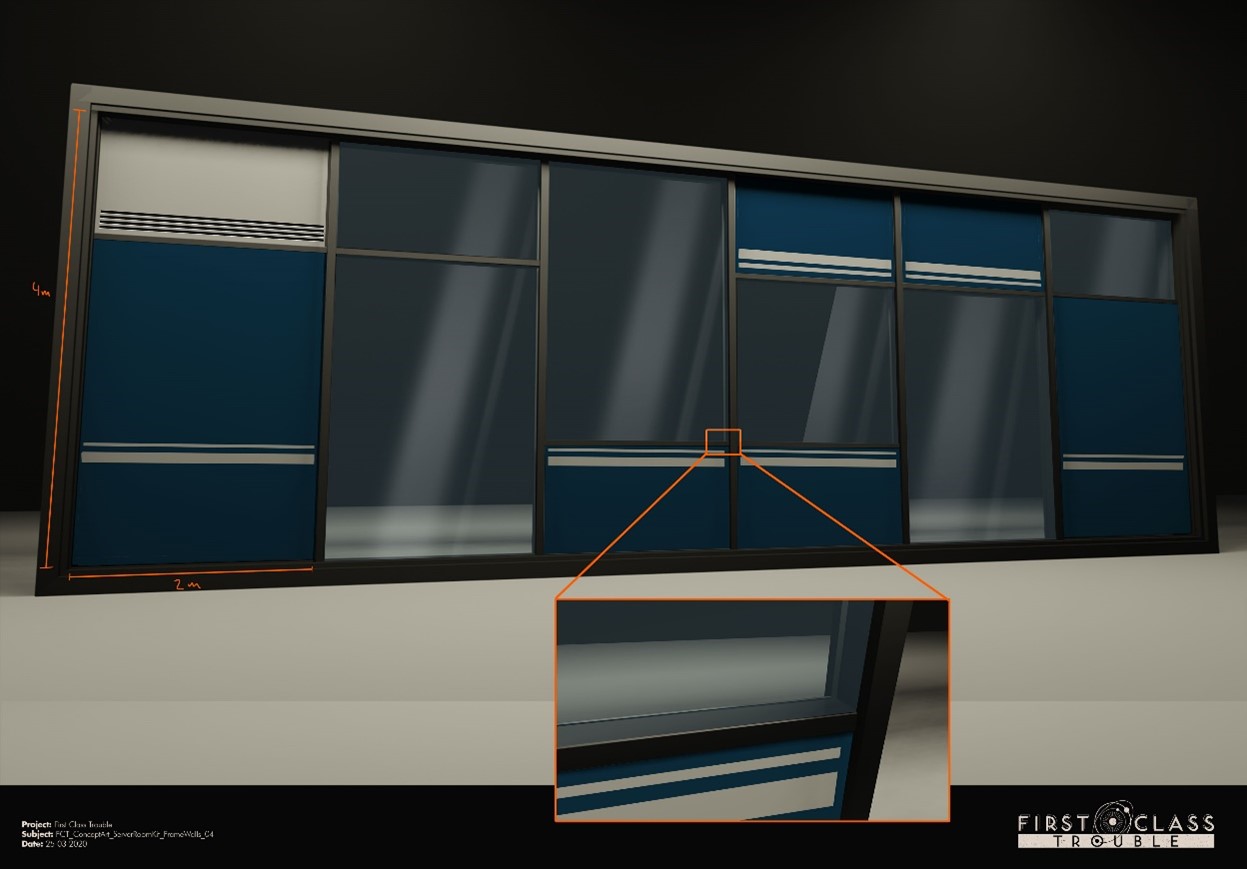 Putting it all together and taking it through PhotoShop gave us our first visual shot of the area. 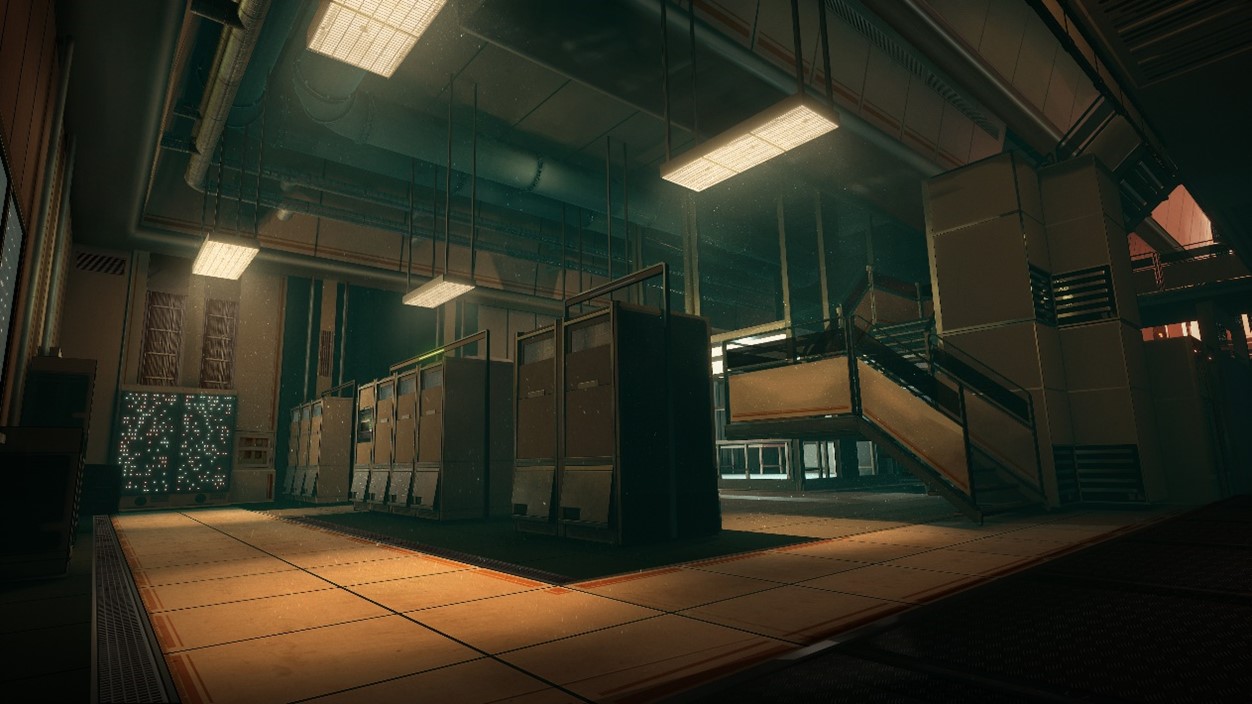 When we are close to having all assets ready and implemented, we let our VFX/Lighting-artist Kasper loose, who does his magic and makes everything work together. The development video of the Gardens level really showcased the impact a light and atmosphere pass can have on the level.

Now, the keen eye might have noticed that the dates on a lot of this concept art goes a fair bit back. If you have played FCT since the beginning you will most likely have already played a version of this area.

However, due to how the game loop progressed, we found it necessary to cut out some of the gameplay in this area and only include the final encounter with CAIN in the Early Access version. Our intent has always been to introduce another variant of it as a full playable level, and we are thrilled to finally being able to!

Conceptualizing a mechanical humanoid is no simple task. We have to imagine that you went through several different versions before landing on the final design. Can you walk us through the Personoid creation journey?

In the perfect world, I would love nothing more than to spend weeks–no months–on designing something like our Personoids. Unfortunately, reality is harsh and we ended up with only a few late night sketches to begin with.

As with all technology in FCT, I took to Rams’ form language for inspiration and tried to create something unique for FCT. Maybe you can see this below with the first three sketches that were created. 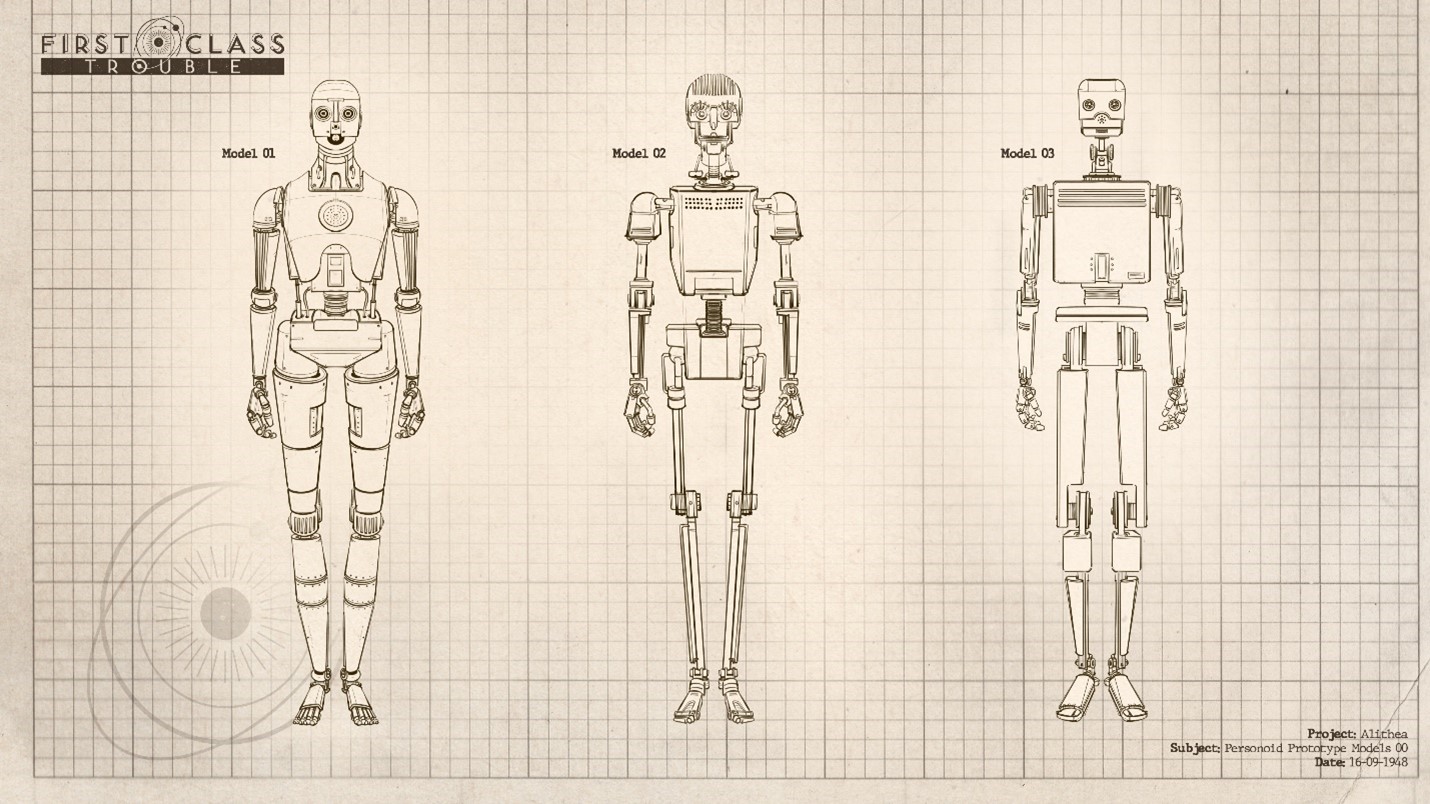 We felt this was a good opportunity to involve our community, since we wanted to create something that would resonate with them. Model 1 took a landslide victory, and we have tried to take as much as we could from it into the final design.

However, due to some animation and clipping challenges, we have had to make minor modifications of it.

All in all, we are super excited to finally bring actual Personoids into FCT, and we cannot wait to show you the final result!

Only my sincerest gratitude and thanks to the entire community for being part of this journey with us. Without you, and the feedback and ideas you bring, FCT would not be what it is today.